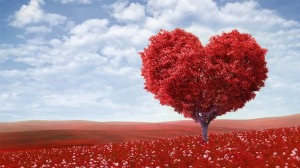 Whoever thought love could be such a lucrative business? Retailers, that’s who! According to the National Retail Federation, the average amount spent on Valentine’s Day is $136/person this year, with a total spent for the holiday of $18.2 billion dollars. That number is actually down from 2016, but it is still a big number for the nation’s second largest Hallmark holiday.

The Bible talks a lot about love, too, but it’s not the type of love the world talks about or that we celebrate on Valentine’s Day. Actually, the Bible says that love is the greatest characteristic we can exhibit as those who seek to be disciples of Jesus Christ.

We find the Bible’s most compelling explanation of love in what is called the “Love” chapter of 1 Corinthians 13. We hear this passage recited at weddings, when man and woman stand before God to pledge their love to one another, as though this passage is speaking of some emotional, romantic feeling that we have at weddings. Listen to the passage as the Apostle Paul writes it to the Corinthian Christians:

4 Love is patient and kind. Love is not jealous or boastful or proud 5 or rude. It does not demand its own way. It is not irritable, and it keeps no record of being wronged. 6 It does not rejoice about injustice but rejoices whenever the truth wins out. 7 Love never gives up, never loses faith, is always hopeful, and endures through every circumstance.

8 Prophecy and speaking in unknown languages and special knowledge will become useless. But love will last forever!

13 Three things will last forever—faith, hope, and love—and the greatest of these is love.

Love can be so confusing. That’s because love is such an interchangeable word. We love our car. We love our job. We love our family. We love our church. We love going to the beach. We love our new hairstyle. We say things like, “Oh, I love how that new dress looks on you!” Or, “I just love how the light brings out the color of that painting.” The long and short of it is that we love everything, and in reality, we end up not loving very much at all.

Apparently, the Corinthian Christians were confused, too. That’s why Paul was writing—to correct their misunderstanding of what it means to love. Of course, much of Paul’s letter is spent correcting their understanding of a lot of issues. Throughout this letter, Paul addresses sex and marriage, lawsuits, incest, food sacrificed to idols, and worship in the church. Then, he turns his attention to love.

Another word they would be familiar with communicated the idea of “brotherly” love—rather like a fond affection. That’s why Philadelphia is called the city of brotherly love.

Paul uses a different word when he writes of love. He uses a new word for a new idea, and it’s a word not used outside the New Testament. The Corinthians didn’t quite get it. Sometimes, I think we don’t either. The word Paul uses is αγαραώ, and the shades of meaning that lie behind the word are sacrificial, self-denial, and unconditional.

For Paul, the word “love” was seated in the will, not in the emotions. This love was not a “feel good” kind of love, but rather a sacrificial, self-denying love. It’s not the kind of love the world is very familiar with.

The world says love is up to us, that love is strictly about a relationship between human beings. We sing about it in our songs. The Beatles classic

tells us it doesn’t matter who you are, where you are, or what you’ve done, all you need is love. Love makes everything right. And, Dionne Warwick sang What the World Needs Now is love, sweet love. It’s the only thing there’s just too little of. Both seem to indicate if we just love each other enough, if we just “feel good” about everybody, then everything will be alright.

The Bible teaches that love is other-worldly. 1 John 4:8 says, “God is love.” Love as Jesus and Paul proclaimed in the New Testament is rooted in the nature and character of God. It’s more than a touchy feely, emotional affection. It is deeply sacrificial and fully self-denying. That’s the love that transforms the world, and it’s the love that will transform us. The world will never be a better place without the love of God. When we experience God’s love then we learn how to love others, for this love is a fruit of the Spirit.

The world also says, “We fall into and out of love.” Again, our music reflects this philosophy. Taylor Swift is good at writing these kinds of songs with You Belong with Me, or Begin Again. Elvis sang I Can’t Help Falling in Love, and the Righteous Brothers sang You’ve Lost that Loving Feeling.

The world tells us love is getting what we need in a relationship. The Bible says love is self-denying. John 15:13 says, “There is no greater love than to lay down one’s life for one’s friends.” That’s the love Jesus Christ showed to us on the cross. It was the ultimate love—the ultimate sacrifice—the ultimate self-denial.

St. Valentine knew this kind of love. May I remind you of his story? As legend tells the story, Valentinus was a Roman in the 3rd Century who protected Christians from persecution during the reign of the Roman emperor Claudius II. Valentinus was arrested for breaking Christians out of prison.

He converted to Christianity while in prison and was condemned to death. He was beaten with clubs, stoned and finally beheaded outside the Flaminian Gate on February 14, 269. After his death, this gate was known as Porta Valentini. While he was in prison he sent messages to his friends saying, “Remember your Valentine!” and “I love you.”

On the night before he was executed, he sent a note to the jailer’s daughter, whom he had especially befriended, and he signed that note, “From your Valentine!” Valentine gave himself in sacrifice for others. He demonstrated the greatest characteristic—love in the biblical sense. What a shame that Hallmark and Hollywood have co-opted the concept of love, and we’ve come to accept it as something totally other than it was ever meant to be.

So, here’s the challenge. Find ways to show biblical love this Valentine’s Day. Word of warning: Guys, go ahead and buy the roses and the candy. You’ll be sorry if you don’t, but what way can you live more sacrificially toward your spouse? What time can you give up to serve in your community or in your church?

Remember, it isn’t love until it costs us something. When love is costly, when love is about giving something up, when love is about surrendering our will to that of another, then we can sing with John, Paul, Ringo and George, All You Need is Love, and there’ll be meaning and transformation. What will you do? It’s up to you!