The old office is empty. I’ve already taken the keys off my key chain, ready to pass them on to my successor in the Monroe District. I carried out the last box yesterday. I have a lunch date Monday as District Superintendent, but other than stopping by for that date, I don’t plan to be back in that office for work.

The new office is piled high with boxes and pictures and such. Everything that was at the old office has now made its way over to 1st UMC. Vanessa was complaining last night that she’s never been in that office so she couldn’t offer much help when I asked her about arranging things for me. The new office is pretty much a shambles right now. I haven’t unpacked the first box, but they’re there, at least.

There is one item I have put in its place in the new office. It wasn’t at the old office. It’s a new piece altogether but I like it so much I already knew where it needed to be placed. The new piece was a gift from the family of a deceased former church member. It’s a larger than life portrait of “The Duke.” That’s right! John Wayne, and I’ve placed it in an open space on the bookshelf facing my new desk. Every time I look up from my desk I’ll be staring at The Duke.

One would think a Methodist preacher would have a picture of Jesus hanging in his office, or at the very least, John Wesley. Actually, I’d prefer a bobble-head John Wesley, but I can’t bring myself to order one. It seems almost blasphemous to make a bobble-head figure out of John Wesley (dashboard Jesus comes to mind here). 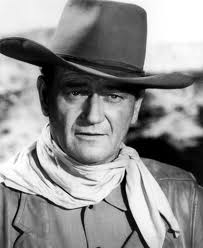 I like my portrait of John Wayne. I don’t care if Vanessa does make fun of me. Miss Jean (the former church member) and I shared a love for John Wayne, and her family wanted to pass on her portrait of The Duke to me (seriously, what were they going to do with a big picture of John Wayne?). They said she always talked about the many John Wayne illustrations I used in my sermons. I try not to use so many any more. Too many younger folks don’t know John Wayne. Same thing with Andy Griffith. I love the Andy Griffith Show. It’s full of life lessons we all need to learn and re-learn, but so many Millenials never watched the show, so they don’t know Andy, Barney, Opie, Gomer or Aunt Bea. As much as I hate it, I’m shying away from those illustrations. Gotta’ be more contemporary, you know!

Perhaps that’s one reason I’m so attached to the John Wayne portrait. I love John Wayne. I love his movies. I love his style. He was, for most of his career, the good guy. The guy who wore the white hat. One exception is The Searchers, but in that movie Wayne starts with a black hat and ends with a white hat. My favorite John Wayne film? The Sons of Katie Elder. Here’s the trailer if you want to see it:

One reason I like the film so much is the role The Duke plays. We never know for sure if Duke is the good guy or the bad guy. We get the impression from the sheriff and the townspeople that he’s a bad guy. And, I guess he is…a gunslinger, after all. The townsfolk don’t want much to do with him, don’t want him in town. In one scene, the sheriff even comes up to him and urges to hurry out of town and warns him not to cause any trouble. If he was such a bad guy, why didn’t the sheriff arrest him, or order him out of town? I’m saying there’s more to the back story here we don’t know.

I believe we find out the back story in the unfolding of the plot of The Sons of Katie Elder. We discover (at least I do) that “Big John Elder” is a man who knows the right thing to do, and really wants to do the right thing. It’s just that life sometimes presents us with choices and we don’t always choose the right. Big John comes seeking redemption in doing the right thing to honor his mother’s memory. Doing the right thing presents its own set of challenges, but Big John pursues the right the best way he knows how. It ain’t always pretty. It ain’t always easy. But right is right, and right is in his heart. Reminds me of King David. He was a man after God’s own heart even if he did make a few (that’s an understatement) bad choices along the way.

I like to think I try to do the right thing. I want to do the right thing. It’s just that life gives me to many opportunities to make the wrong choice. Sometimes I do make the wrong choice. I’m left with trying to find redemption. And yes, sometimes I even believe that I can gain redemption by “doing” the right thing next time. I’ve learned that my redemption lies solely in faith in Jesus Christ. No amount of “doing” good can redeem the wrong choices of my life, but the blood of Jesus Christ washes away all my sin, makes me a new creation, and affords me the opportunity to rest in the love of the Father. The love of the Father gives me a new perspective from which to understand all that is right.

Yeah, it’s a little convoluted, but that’s really how my mind works. I’ll look up from my desk, and there will be The Duke staring back at me. I’ll remember that as much as I want to be the good guy, I won’t always make the best choice. I’ll also remember that my goodness rests in trusting Jesus, and I’ll give thanks for all Jesus has done to redeem me. And I’ll probably give thanks for John Wayne…I love his movies!