I signed up for Instagram this week. I’m still learning how to use it, but here’s the purpose as shared on the Instagram website: “Instagram is a fun and quirky way to share your life with friends through a series of pictures. Snap a photo with your mobile phone, then choose a filter to transform the image into a memory to keep around forever. We’re building Instagram to allow you to experience moments in your friends’ lives through pictures as they happen. We imagine a world more connected through photos.”

Instagram is only five years old. It was launched in 2010 by Kevin Systrom and his friend, Mike Krieger. Those two parlayed an initial $500,000 investment into $1 billion when they sold Instagram to Facebook in 2012. Today, there are over 300 million users who are “more connected through photos.”

“A world more connected through photos.” That’s an interesting purpose, especially when we consider the saying, “A picture is worth a thousand words.” A picture can be worth a thousand words, but sometimes it can be worth ten thousand words. Other times, it cannot be worth the paper it’s printed on…or, should we say the computer it’s posted on. We can try to tell someone of the beauty of our trip to the beach, but if we have a photo as we describe the peacefulness of a pink and orange sunset, the story comes alive. Words carry great meaning, and can describe an event vividly, but put those words to picture and the whole experience changes. We live in a world where both words and pictures are necessary.

Words and pictures. Our words are enhanced, enforced, infused with life when accompanied by a picture. That’s exactly why our faith in Christ is to be more than words. The Apostle James says as much in his letter in the New Testament. He acknowledges that faith and action are two sides of the discipleship coin. One side is faith and the other is actions. Faith always leads to action, or it is no faith. As our faith grows, so grow our actions. Actions grow out of faith. Faith grows as a result of our actions. Or, to use the Instagram analogy—faith is our words, but our actions become the picture through which we show the world our faith. Our actions are worth a thousand words. 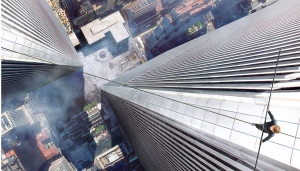 The new movie, The Walk, came out last Friday. The movie tells the true story of French high wire artist Phillipe Petit, and of his walk on a tight rope between the twin towers of the World Trade Center on August 7, 1974. Long before Petit attempted that feat, another Frenchman had already crossed the great Niagara Falls on a tightrope. His name was Charles Blondin. Blondin crossed Niagara Falls on several occasions. On one occasion, he was holding a press conference before his walk, and he turned to his large audience, which included numerous reporters from various newspapers, and he asked them, “How many believe I can walk across this tightrope over the Falls pushing a wheelbarrow?”

People cheered loudly. They were sure Blondin could do it.  Then he asked, “How many believe I can push a wheelbarrow across the tightrope with a man sitting in it?”  Again, there was a loud response.

Blondin then pointed to one of the most enthusiastic men in the audience, and said, “Okay, you get into the wheelbarrow.” The man made a hasty exit.

Blondin demonstrated that there is often a great difference between belief, the faith we SAY we have, and the action faith we really have. The measure of our faith is NOT our “talk” it is our “walk.” Faith is what we do. It is not what we say we will do. Faith is never something simply to be talked about. Faith is something that must be demonstrated in the way we live.  Paul Harvey once said, “If you don’t live it, you don’t really believe it.” That’s exactly what James was saying when he said, “Show me your faith apart from your works, and I will show you my faith by my works” (James 2:18).

It all begins with Jesus, though. Our relationship with Jesus is where our faith begins and our passion rises. Encountering Jesus moves us to action. One day a young disciple of Jesus, desiring to best disciple he could be, visited the home of an elderly saint. He had heard that this old man had never lost his first love for Christ over all his years. The elderly man was sitting on the porch with his dog watching a beautiful sunset.

he young man asked this question: “Why is it that so many Christians passionately chase after God during the first year or so after they come to faith, but then fall into the complacency of just going to church once in a while, and they end up not looking any different than those who aren’t even Christians? I have heard you’re not like that.”

The old man smiled and replied, “Let me tell you a story. One day I was sitting here quietly in the sun with my dog. Suddenly, a large rabbit ran across the field in front of us. Well, my dog jumped up, and took off after that big rabbit. He chased the rabbit over the hills with a passion.

“Soon, other dogs joined him, attracted by his barking. What a sight it was. That pack of dogs ran barking across the creeks, up stony embankments and through thickets and thorns! Gradually, however, one by one, the other dogs dropped out of the pursuit, discouraged by the course and frustrated by the chase. Only my dog continued the pursuit of the rabbit.”

The old man continued, “The answer to your question lies in that story.”

The young man sat in confused silence. Finally, he said, “Sir, I don’t understand. What is the connection between a rabbit chase and the quest for God?”

“You don’t understand,” answered the old man, “because you didn’t ask the obvious question. Why didn’t the other dogs continue in the chase?”

“Because the other dogs hadn’t seen the rabbit,” came the old man’s reply.